You are here: Home / Crime / Courts / Only one Iowa city in top 40 for number of stolen cars 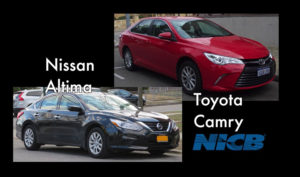 Out of nearly 400 metro areas nationwide, only one Iowa community ranks in the top 40 for most stolen vehicles per capita.

The National Insurance Crime Bureau ranks Omaha-Council Bluffs as the 39th worst place in the country for rip-offs, with just over 4,000 vehicles stolen there last year. The bureau’s Kristen Sleeth says older cars top the “Hot Wheels” list in Iowa and nationwide.

“In 2017, a vehicle was stolen once every 40 seconds in the United States,” Sleeth says. “Similar to previous years, the most stolen cars were the Honda Civics and Accords made in the late 1990s, before anti-theft technology came into play.” Last year’s top ten list of most-stolen 2017-model vehicles includes six cars, three pickup trucks and a van.

“The Nissan Altima and Toyota Camry came in first and second,” Sleeth says. “Pickups from GMC, Ford and Dodge Ram were popular targets along with the GMC Savana.” Vehicle theft victims are often their own worst enemies, as in most cases, vehicles were left unlocked and in many instances, the keys were still inside.

Anti-theft technology has advanced significantly in recent years and Sleeth says it clearly slows down potential thieves. “For every one 2017 Nissan Altima stolen there were six 1998 Honda Civics taken,” Sleeth says. “The new Hondas, with the anti-theft technology, they don’t even make the Top 10 List.”

There were 381 metro areas ranked in the report. The most cars were stolen per capita in Albuquerque, New Mexico, while the fewest were taken in State College, Pennsylvania. In Iowa, the Quad Cities area ranks 96th nationally, with more than 1,000 vehicles stolen last year, while the Des Moines metro placed 120th. Sioux City ranks 164th, Cedar Rapids is 166th, Waterloo-Cedar Falls places 284th, Iowa City is at 301, Ames ranks 335th and Dubuque places 351st.