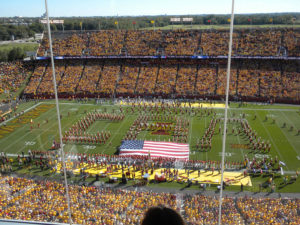 The band formed her initials after coming onto the field and there was a video show in tribute to her.

Players from both sides and the fans held a moment of silence to honor the 22-year-old woman who Athletic Director Jamie Pollard says, “probably embraced being a Cyclone more than anybody we’ve ever had.”

Arozamena was stabbed to death Monday morning at the Coldwater Links golf course that sits just east of the football stadium. Ames police arrested 22-year-old Collin Richards and charged him with murder in Arozamena’s death.

Richards is believed to be homeless and police say had been living in the woods near the golf course.

Arozamena was a native of Spain who became just the second Cyclone woman to win the Big 12 golf championship last year. She was to be recognized as the Cyclone Female Athlete of the Year at the football game.