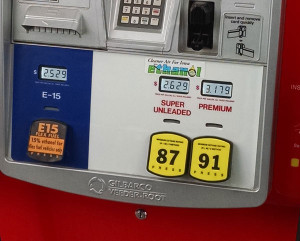 Sources tell Radio Iowa Trump will be in Council Bluffs on October 9 and he’s likely to announce the EPA will allow year-round sale of gasoline with a 15 percent ethanol blend.

Trump mentioned his upcoming trip to Iowa this morning in Washington, D.C. as he announced some details of the new United States Mexico Canada Agreement. Trump called the USMCA “a very big deal” for farmers and he said exports of wheat, poultry, eggs and dairy products — including ice cream — should increase to both neighboring countries.

Iowa Senator Joni Ernst was among those who gathered today in the White House Rose Garden for the president’s news conference and Trump mentioned Ernst twice during his remarks.