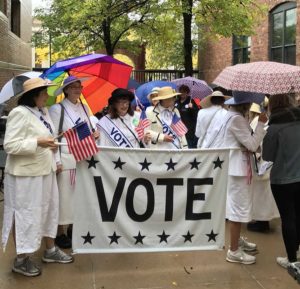 A group of Democrats with banners, American flags and umbrellas gathered in downtown Des Moines and marched to the Polk County Courthouse to vote this morning, the first day “early” voting is allowed in the state.

Fred Hubbell, the Democratic candidate for governor, climbed on a ledge on the side of a building and addressed the group.

“Thank you for coming out today. Thank you for being excited to vote for Democrats and let’s go win this election by starting to vote,” Hubbell said and the crowd cheered.

Among the crowd were a dozen women arrived wearing white suits, the uniform for suffragettes who campaigned for the 19th Amendment that gave women the right to vote. Allison Engel of Windsor Heights held a banner that featured a single word: VOTE.

“Our grandmothers marched for the right to vote, for being left out of the political discussion and we feel that women here a century later have the same complaints,” Engel said. “Women need to mobilize and vote and have a blue wave this November.” 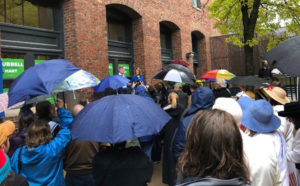 Fred Hubbell speaks during event to kick off early voting.

Jodi Stanfield of Windsor Heights said organizing a group of modern-day suffragettes was one way to channel her anger.

“I feel passionate about getting people out to vote and I thought: ‘Let’s make a spectacle of it. Let’s get dressed. Let’s get people’s attention and get them out and start voting on October 8th,'” she said. “…It’s time to create the kind of change we want in this country, starting today.”

Democrats are holding “First Voter” rallies in a dozen Iowa counties today. The Iowa Republican Party has no public events planned today. An Iowa GOP spokesman says there will be an effort to emphasize early voting to the crowd at President Trump’s rally in Council Bluffs tomorrow night.