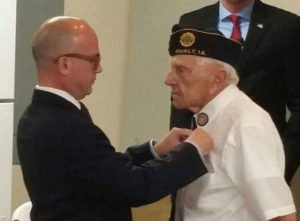 A World War II veteran from Iowa was awarded Tuesday with France’s highest distinction for his actions nearly 74 years ago.

Marcus Bartusek, known in his hometown of Manly as “Stub,” was part of the 106th Infantry Division – which helped with the liberation of France in 1944. Consul General of France Guillaume Lacroix presented Bartusek with the French Legion of Honor during a ceremony held at the American Legion post in Manly.

According to Lacroix, what America did in 1944, his country “will never be able to repay in full.” “The only thing we can do is to say, ‘thank you Mr. Bartusek, thank you America’s greatest generation,'” Lacroix said.

Lacroix noted, in the 1940s, France was “on the verge of being erased from the map” by Nazi Germany. “Only a few brave men and women, French, did say ‘no’ to Hitler and the ideology of Nazism. Without the assistance of our allies, this would have not have succeeded,” Lacroix said.

The 93-year-old Bartusek doesn’t consider himself a hero. “No, I was just was doing the job they asked me to do,” Bartusek said. “I’d do it again if I had to, but I don’t want to.” Bartusek said he didn’t start talking much about his experiences in World War II until 10 or 15 years ago. He’s encouraging younger veterans to share their stories now.

“I hope all these people who were in the service tell their grandkids…while they have it fresh in their mind, some of the things that happened,” Bartusek said. The French Legion of Honor was established in 1802 by Napoleon Bonaparte.