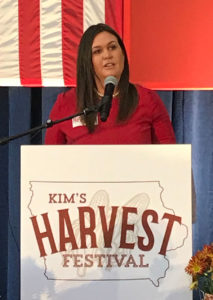 White House Press Secretary Sarah Sanders was the evening’s keynote speaker. She told the audience “elections have consequences” and there’s a 5-to-4 conservative majority on the U.S. Supreme Court now because Donald Trump is president.

“When it came to the nomination and the confirmation of Judge Brett Kavanaugh, the way the Democrats acted was disgraceful,” Sanders said, “and it showed that we absolutely need to make sure we get out and vote and keep Republicans in the states and in congress.”

Senator Chuck Grassley said “Remember Kavanaugh!” should be the battle cry of every Republican campaign in the country. And Senator Joni Ernst asked the crowd to acknowledge Grassley’s role in getting U.S. Supreme Court Justice Brett Kavanaugh confirmed.

“I know this is Kim Reynolds’ night, but can we give a big round for Chuck Grassley?” Ernst asked. 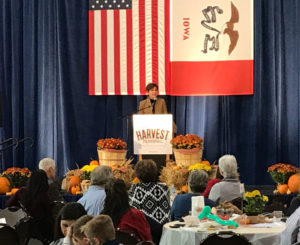 That was the third of three ovations Grassley received from the crowd of Republicans gathered in Des Moines Saturday night. Reynolds, during her speech, asked the crowd if they’d watched her debate with Democratic challenger Fred Hubbell.

“I have to tell you, I had a fun,” Reynolds said. “It was my first debate ever, but it is pretty darned fun to talk about the amazing things that are happening in this state and talk about how we want to build on that success and I think it was a stark contrast.”

Reynolds suggested Hubbell spent the hour on live TV “tearing down our state.”

“It’s no wonder that he didn’t look like he was having much fun,” Reynolds said.

Reynolds and Hubbell are scheduled to debate again on Wednesday night. Their third and final debate will be held on Sunday morning.