You are here: Home / News / No King versus Scholten debate in Iowa’s fourth district 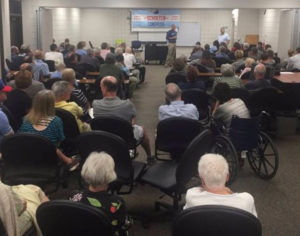 It’s political debate season in Iowa. Half a dozen debates among candidates for governor and congress have been held already. The final two debates between Republican Governor Kim Reynolds and Democratic challenger Fred Hubbell will be held tonight and this Sunday.

There will be no debate, however, featuring candidates in Iowa’s fourth congressional district. Republican Congressman Steve King of Kiron says a debate is unnecessary.

“Nobody comes to me and says: ‘I don’t know where you stand on an issue,'” King says. “Everybody’s known where I’ve been from all the years I’ve served in congress.”

King is seeking a ninth term in the U.S. House. King last debated an opponent in 2014 when he faced an Iraq War veteran in the General Election.

J.D. Scholten, a Democrat from Sioux City, is challenging King this year. Scholten says debates are about holding candidates accountable.

“He’s been to Austria five out of the last six years on the taxpayers’ dime,” Scholten says. “I want to know why. It’s not like we’re finding trade routes to Austria because of it.”

Scholten, a paralegal who is a former professional baseball player, is holding town hall meetings in each of the 39 counties in the district.

“My race isn’t against him. My race is to fight and work for the people of this district and I think that’s why we’re becoming more and more popular,” Scholten says. “…I’m not there just calling him names, but he should be held accountable.”

Scholten says “you can’t fake showing up” and King has stopped holding town hall meetings in the district.

King says he speaks with thousands of people in “tele-town hall” meetings and meets face-to-face with constituents, but stopped doing public town hall meetings in the district because they’ve turned into a forum for protesters.

Scholten launched his campaign 15 months ago and has out-raised King in each quarter. Over the last three months, Scholten raised $661,000. That’s four times as much as King raised during the same period for his reelection.