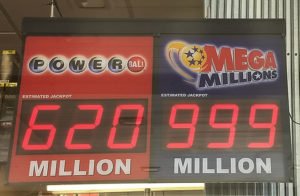 Retail signs only go up to $999 million, despite the $1.6 billion Mega Millions jackpot.

Everyone will be clutching their tickets once again tonight hoping to see the numbers that will bring them the $1.6 billion Mega Millions jackpot.

Iowa Lottery spokesperson, Mary Neubauer, says there were around $5,800 a minute in tickets sold during the busiest time before the last drawing Friday. “Individual tickets still only had two to three plays on them — individual purchases I should say — so what we see was just a whole bunch of people having fund, but we didn’t see people going overboard here in Iowa,” Neubauer says. “And that’s exactly what we hoped would happen and what we constantly remind people to do — which is play responsibly.”

The Powerball jackpot has also gone unclaimed for weeks and is estimated at $620 million. Neubauer says you should take the same approach whether its Mega Millions or Powerball. “Have fun daydreaming about what you might do with the money, but remember that there’s no guarantee that you’ll win the jackpot,” Neubauer says.

Neubauer says Iowa isn’t a state where you see long lines of people waiting to buy tickets because our population isn’t as big as some other states. But, she says sales have been brisk and kept retailers busy. “Our center that takes calls from our retailers is being bombarded with calls for more paper right now, because obviously retailers are printing so many tickets that they are going through paper at a really fast clip in their lottery terminals. So, we are getting paper out to them,” according to Neubauer. And the large Mega Millions jackpot has some retailers being creative in keeping track of the numbers.

“And so you’re see just a lot of handwritten signs where people are kind of x-ing over the word million and writing in billion,” Neubauer says. “You know what, that’s fine, it doesn’t all need to look perfect. We’re just trying to get the word out there.” The final estimated jackpots could change again for both drawings if ticket sales continue to be brisk.

“With sales as high as they are around the country sometimes even our best estimates fall behind the times. So, every day we are analyzing sales figures to see of the jackpot needs to be raised again,” she says.

Big jackpots often lead to groups of people getting together to buy tickets. Neubauer says if you go this route, be sure to keep good records. “Keep very close track of who put in money for this particular drawing and who didn’t — because we don’t want there to be a disagreement about that later,” Neubauer says. “And then if you are the person buying the tickets for your office pool or group, maybe just snap a quick picture of all of the tickets and send it around to your group. Or photocopy the tickets and send that photocopy around to the group so that everybody can see which tickets are involved.”

She says there are cases where a group winning a jackpot turned into a lawsuit because it was unclear who contributed — and who gets a share of the prize. “When money is involved, sometimes tempers can flare, and we just wouldn’t want to see that happen. We want this to be a fun thing. Not something that makes someone mad,” Neubauer says.