You are here: Home / News / Reynolds touts ‘Republican team’ as she embarks on tour 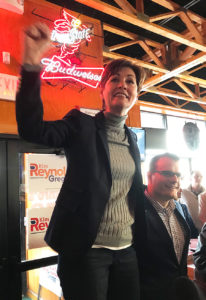 Iowa’s Republican governor rallied with a crowd of supporters early this morning inside a West Des Moines restaurant.

Reynolds climbed on top of a chair to offer her rebuttal to Democratic rival Fred Hubbell’s argument that he’d reprioritize the state spending.

“Wages are going up. Taxes are going down and I want that businessman to know that this CEO has balanced the (state) budget. We have $127 million surplus when we’re investing like never before in education, health care and public safety,” Reynolds said, clapping her hands in emphasize her point, before adding: “They told me not to scream. I’m screaming. Uh oh! It’s part of who I am.”

Reynolds shared the event with three other Republican candidates running for statewide office.

“This Republican team is a team that’s getting things done,” Reynolds said. “…We are working hard to cut taxes while maintaining our priorities.” 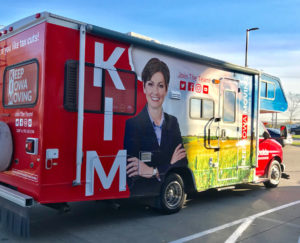 Reynolds is heading to Boone, Ames, Marshalltown and Iowa Falls today in her campaign RV. It’s been newly “wrapped” with a huge photo of the governor on the side, the words “Keep Iowa Moving” on the front and “Honk If You Like Tax Cuts” on the back.

Hubbell kicked off his own bus tour yesterday and his bus carries the words “Get Iowa Growing the Right Way” on its sides.