You are here: Home / News / Leading candidates for governor throw ‘more money’ accusations at one another 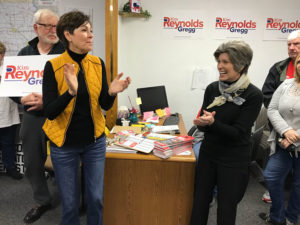 Just eight days remain until Election Day, so candidates and their supporters spent the weekend chasing down absentee ballots and claiming momentum is on their side.

A crowd at the Scott County Republican Party headquarters in Davenport greeted Governor Kim Reynolds Saturday morning and she asked if they were ready to “finish strong.”

“We’ve had great turn-out, great energy, great momentum and you can feel it,” Reynolds said. “You can sense it, so we just have to keep that going.”

About 60 miles to the west, rival Fred Hubbell met with a group of Democrats in a Coralville home before they departed for door-to-door work. Later, on a residential street in Iowa City, Hubbell spoke with reporters.

“We are very optimistic about what’s going on. We’ve got a lot of people all across the state we’re meeting with and talking to,” Hubbell said. “But we’re going to keep working every single county.” 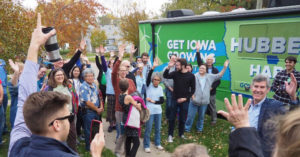 Reynolds, in the campaign’s closing days, touts the tax cuts she approved and accuses Hubbell of making promises that will require tax increases.

Republican U.S. Senator Joni Ernst was with Reynolds in Davenport and echoed those sentiments.

“We don’t want to see a Democrat moving into the governor’s office because everything that we have worked for will be taken away,” Ernst said.

Hubbell is suggesting Reynolds has unfulfilled promises that will require more money.

“Governor Reynolds, when you really think about it, Future Ready Iowa is 90 percent unfunded, STEM has almost no funding. Her mental health has no funding. You know, Medicaid privatization keeps going up in costs,” Hubbell said Saturday. “If she’s going to do anything, she’s going to have to raise taxes.”

This past Saturday at 5 p.m. was the deadline for getting your name on the voter registration list for this year’s election. Iowans may register to vote at their precinct on Election Day, but must show a form of ID, like a driver’s license or passport, as well as proof of residence, like a utility bill.