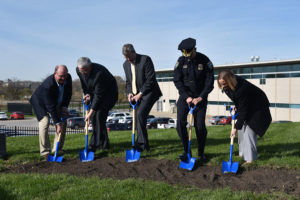 Work is now underway on a new building on the Des Moines Area Community College (DMACC) campus in Ankeny that will serve as a training ground for crime scene investigators.

“I’m going to recreate crimes scenes there in different areas. So, I can have one in the bedroom, I can have a crime scene in the living room or out on the deck, or in the yard,” Galien explains. “But it’s also going to be useful for interview and interrogation classes. With that observation video those teachers will be able to run a scenario in a mock interview room — and then everyone will be able to watch the behavior reactions.”

Galien says training won’t be limited to the DMACC Criminal Justice Program, as law enforcement will be able to use it too. “I you want to practice SWAT entries in different points — like the funnel of a staircase — and how to properly clear that without anybody getting injured,” Galien says.”Or how do you enter from the foundation door to make sure that no one gets injured or the suspect isn’t alerted to your presence, or a deck. So different points of entry, how to clear it, different scenarios.”

This is believed to be the first facility of its type in Iowa. Galien is looking forward to having the building, as she says they now have to use practice crime scenes in current buildings and hallways, and that presents some problems. “We get a lot of weird looks and security, we usually have to tell them, because sometimes we have blood all over the place or different types of evidence is laying there. Or they are outside in the grass and we just hope it doesn’t rain,” she explains.

Galien says working a crime scene is not the same as what you see on television, where everything is processed and completed by the end of a half-hour show. “You don’t get a second chance, and you only get one chance to do it right,” according to Galien. “Unfortunately you learn by making mistakes. So we want our students to be able to walk through those scenarios go through at their own pace, slowly and learn, so they make those mistakes and have that learning curve, before they are out there on the street and they make a mistake in a huge and important case.”

The building is expected to be open for classes in the fall of next year.