You are here: Home / News / U.S. Representative King says ‘fiasco’ of past week based on lies (AUDIO) 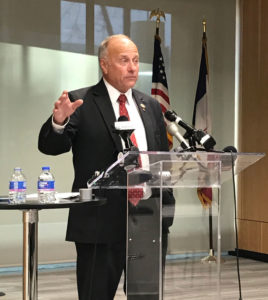 Republican Congressman Steve King is forcefully rejecting critics who’ve accused him of holding the same views as the man who killed 11 Jews at a Pittsburg synagogue. King spoke at a forum today in Des Moines and verbally clashed with Iowa State University student Kaleb VanFossen, who was in the crowd.

“Do not associate me with that shooter,” King said emphatically, as VanFossen continued to speak. “I knew you were an ambusher when you walked in the room, but there’s no basis for that and you get no question and there’s no answer. You’re done. We don’t play these games here in Iowa.”

King asked one of the event’s hosts to escort VanFossen out of the room.

“You crossed the line. It’s not tolerable to accuse me to be associated with a guy who shot 11 people in Pittsburg,” King said. “I am a person who has stood with Israel from the beginning. The length of that nation is the length of my life and I”ve been with them all along and I will not answer your question and I will not listen to another word from you and this is over is he keeps talking.”

King spoke for nearly 47 minutes, outlining his legislative priorities for 2019 and answering half a dozen questions from the public who had registered to attend. Midway through, King was asked about this week’s tweet from the chair of the National Republican Congressional Committee. Ohio Congressman Steve Stivers said the country must “stand up against white supremacy” and he condemned King’s “recent comments, actions and retweets.”

“There’s a question that I don’t favor, but it was offered respectfully. Thank you,” King replied. “First I will say that Stiver’s behavior has befuddled every Republican I’ve talked to and everyone that I know, including our leadership.”

King then referred to his written response, which accused Stiver of being an “Establishment Never Trumper” who secretly hopes the House flips over to Democratic control. King suggested the uproar had been caused by a Washington Post story.

“The entire fiasco that you’ve seen here in the state for the last three days or so is all based on the lies on this page right here,” King said, holding a copy of the article aloft.

King spent seven minutes reading from the story and providing his response to allegations he “duped” sponsors of a trip to Polish sites associated with the holocaust by taking a side trip for a meeting in Hungary.

“Around the table was one person of the Freedom Party, one person who said he was Jewish,” King said, “and the others were I’d say random, successful business people, but there was no meeting there with people who had Nazi ties.” 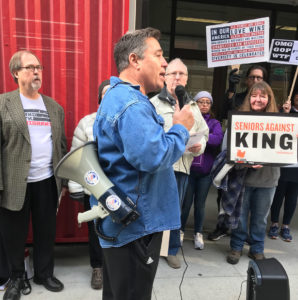 In closing remarks, King said serving in the U.S. House for 16 years “is the joy of his life” and policies like ending birthright citizenship are “on the cusp.”

“A lot of this legislation that I’ve laid down more than 10 years ago is now poised to move forward and become law,” King said.

The Des Moines Partnership has sponsored a public series with state and federal candidates for several years. Earlier this fall, King’s opponent, Democrat J.D. Scholten, spoke to the group.