You are here: Home / News / Campaigns make a weekend rush to the close of voting Tuesday 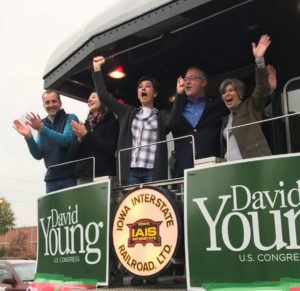 On the final weekend before the election, Iowa candidates and their supporters made final pitches to voters in all sorts of places, from front door steps to the back of a train.

Early Saturday morning in Des Moines, Governor Kim Reynolds, Congressman David Young and other members of the Republican team climbed aboard a train, bound for a few stops in western Iowa.

“Victory Express! Woo hoo!” Reynolds said, laughing with the crowd. “It’s really going to be close, so we have to have all of you turning out and making a difference and that’s our last plea.”

“We can’t stop. We can’t slow down. We need all of you to help us finish strong and take this victory across the finish line,” Reynolds said.

“Pick up that packet. Come back. Get another one. Even if it starts to downpour and rain, you’d rather be wet today than crying on Wednesday,” Axne said, to cheers and laughter.

Axne told the group her race against Young is considered too-close-to-call.

“This is one of the most important races in the country because this literally is the opportunity for us to take back the majority and make sure that Democratic values, those hard-fought Iowan values, are represented out in congress,” Axne said.

Young gave a similar charge to his supporters.

“These elections around the country are very competitive and tight. They talk about this blue wave. We have a red dam up here in Iowa,” Young said. “Let’s go get ’em!” 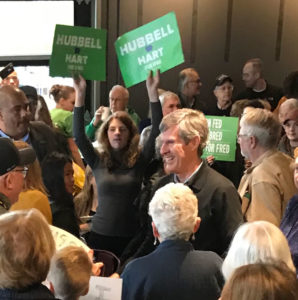 Fred Hubbell, the Democratic candidate for governor, is holding rallies around the state, too. Hubbell spoke to a few hundred Democrats in an Iowa City brew pub early Sunday afternoon.

“I just have a question to get started: Are we ready to get out and vote for change?” Hubbell asked and the crowd cheered.

Hubbell ended his speech by giving his supporters a to-do list.

“We need you on the front lines. We need you knocking doors. We need you spreading the word about how important this election is,” Hubbell said. “At the end of the day, we need your vote.”

The latest data from the secretary of state’s office shows there are more than 2.17 million registered voters in Iowa. More than half a million Iowans asked for an absentee ballot. As of Friday, about 447,000 of those absentee ballots had been returned.