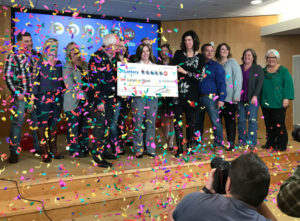 Lerynee West of Redfield picked up her Powerball jackpot today.

A 51-year-old single mom from Redfield has claimed the largest lottery prize ever won in the state of Iowa. Lerynee West spoke at a news conference this morning at Iowa Lottery headquarters.

“I have been extremely blessed to win this big Powerball. This will forever change my life and I will use this opportunity to impact others,” she said. “…As I stand here today, I know the responsibility that I have to do good with this money and my life has changed forever. I plan to make thoughtful and responsible decisions on giving to my friends, my family and setting up so my grandchildren will all have a college education.”

West grew up in Earlham. She left high school at age 17. When she was 19, she earned her GED.

“Soon after that, I started my family. I have three awesome, beautiful daughters. As a single mom, I worked full-time. I went to school full-time at nights and weekends and my daughters had to sacrifice a lot for that,” West said. “…My girls and I used to dream about winning the lottery. Never thought we would be here today.”

West bought the winning ticket at the Casey’s in Redfield on Friday, October 26 for the next day’s drawing. 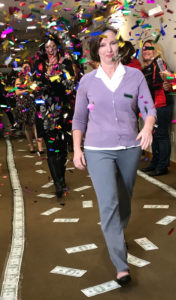 “First I was in disbelief and then I had the reaction of: ‘I don’t want anything to do with it,'” West said of her initial reaction, after checking her numbers. “It’s taken a while to get used to the thought of the whole new dynamic of what my life is going to be.”

West has chosen to take a lump sum payment of $198.1 million, which is $140.6 million, after taxes. She’s already established a charity.

“The Callum Foundation is set up in honor of a grandson of mine who was born in April,” West said. “He was born at 24 weeks and he lived for one day and so that foundation is to honor him and to do good for others.”

West bought her ticket on the day she was moving into the first home she’s ever owned. West told reporters this morning the first thing she plans to buy with the money is a new car.

“Currently I drive a Ford Fiesta that people have just beat up when I’m not in it,” said West, who has six grandchildren. “It’s got 142,000 miles on it and I’m going to get a car big enough that I can take all my grandchildren places now.”

West has been a “procurement analyst” for Wellmark Blue Cross Blue Shield.

“So currently I’m retired,” she said today, to cheers from her family and friends.

West has been a two-times-a-week lottery player. West says dreaming about what she’d do with a jackpot is “totally different” from the reality of winning one.

“When we would dream about it, I would get all frivolous and I would have a whole line-up of cars that I was going to buy and that’s not the case anymore,” West said. “All of a sudden, you know, once you have won and you realize the responsibility and just the impact you can make, all frivolity goes out the window. I started thinking more of who I’m going to help and my stuff has been sort of an after-thought to me.”

West told reporters she a hard time convincing relatives she had the winning ticket. Finding the ticket is a big part of her story as well.

Back on Friday, October 26, West was moving into a house in Redfield, the first home she’s every owned. Around noon, West asked her sister to take her to the Casey’s in Redfield.

“She took me in her vehicle ’cause mine was full of moving stuff,” West said. “…She got a coffee. I got a coffee and I got a slice of pizza and I said: ‘Oh, yeah. Can I get my lottery tickets?'”

West has been a routine, two-times-a-week Powerball player. West thought she put the tickets in her purse.

“Didn’t think of them again until Sunday morning,” West said.

A friend who was out of town was first to tell West someone from Iowa had a winning ticket.

“(I) went to check my tickets and they weren’t in my purse,” West said. “…At that point I thought: ‘They’re somewhere. They’re probably in my house, in my moving mess, because I haven’t even unpacked yet.'”

West then called her sister to share the news that a winning ticket had been sold in Iowa.

“She said: ‘Funny you should mention that. Your tickets are in my truck.’ So I said: ‘Well, the Powerball’s 4. Can you go outside and check my tickets for me?'” West said in recounting the conversation. And she went outside and she says: ‘Oh my God, Lerynne, the Powerball is 4.'”

West’s sister sent a photo of the ticket and West went to the Iowa Lottery’s website to check the other numbers.

“It took me about a minute, going back and forth, to figure out that I had won and I said to my sister: ‘Get that ticket. Get in your truck and get up here now and drive slow,'” West said.

West started calling relatives, asking them to come to her home in Redfield, because she had won the lottery, but that took some convincing. With $140.6 million in the bank, after taxes are paid, West was asked if she intends to remain in Iowa.

“My life has changed and I’m going to take a little bit to figure out where my ‘new normal’ is,” West said, “but I want to assure you that I never want to forget where I came from.”

The website for the Callum Foundation indicates its grants will address needs such as poverty and hunger, education, animal welfare, and veteran affairs.