You are here: Home / News / Farmers expected to plant fewer soybeans next year 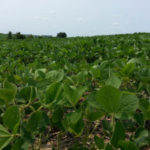 Naomi Blohm, a commodity analyst with the Stewart-Peterson Group, says the market has been anticipating a reduction in soybeans because of the U.S.-China trade war. “But to actually have a concrete number, this is the first time that has happened. So is the market paying attention to this? It’s aware of it,” Blohm says. “But it’s not in essence fresh news, so (the market) is not responding to it.”

Blohm suggests any projections for 2019 should be written in pencil at this point. “I would say based on conversations with producers, they don’t totally know yet,” Blohm says. “They haven’t bought their seed yet. They’re not sure if they just want to continue to switch to their regular rotation on things, or what they’re going to do.”

The USDA is also forecasting a more than 3 million acre increase in wheat for next year.