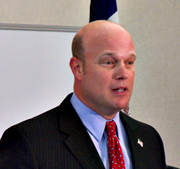 An Ankeny, Iowa, native who has twice run for statewide office is now the nation’s acting attorney general. Democrats immediately began calling on Matt Whitaker to recuse himself from overseeing Special Counsel Robert Mueller’s investigation of alleged Russian meddling in the 2016 election.

Whitaker is an attorney who’s been serving as chief of staff to U.S. Attorney General Jeff Sessions. President Trump asked Sessions to resign and Trump named Whitaker to replace him this afternoon. Whitaker was the Republican Party’s nominee for state treasurer in 2002. In 2014, he competed against Joni Ernst in the GOP’s U.S. Senate Primary. After Ernst won the nomination, Whitaker campaigned with and for Ernst around the state.

“Matt Whitaker is a man of integrity and values and I’m so excited we will have an Iowan serving is the acting attorney general for the administration,” Ernst told Radio Iowa.

Ernst expects Trump to ask the U.S. Senate to confirm Whitaker to the job permanently.

“He is someone who values our American constitution and because of that I do believe the president has decided he should be our next attorney general,” Ernst said, “and so I am thrilled with the president’s decision.”

Chris Hagenow, the Majority Leader in the Iowa House, has been Whitaker’s partner in a Des Moines law firm.

“First and foremost, he is a tremendous attorney,” Hagenow told Radio Iowa. “He’s very bright, very knowledgeable…He was the US Attorney for the Southern District of Iowa for over five years and certainly got a lot of experience there.”

Hagenow got several texts, all at once, right after the president tweeted Whitaker was his acting attorney general.

“He is a good, hardworking Iowan…He’s been successful at everything in life that he’s set himself out to work on, so whether it be as an attorney or a husband and father or Hawkeye football, he’s just a successful guy,” Hagenow says. “I believe that the president and Matt have a good working relationship and a mutual respect.”

Whitaker played football for coach Hayden Fry at the University of Iowa. He’ll now be a player in overseeing the investigation of Russia’s alleged election meddling. Democrats in the U.S. Senate have called on Whitaker to recuse himself from that oversight role.

Jeff Sessions’ decision to withdraw from oversight of the probe irritated President Trump, who routinely aired his beefs about it on Twitter.