You are here: Home / News / GOP campaign worker says he was racially profiled; cops cite refusal to explain his work 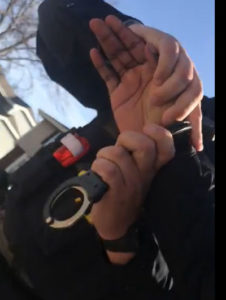 A 24-year-old black man hired to go door-to-door in West Des Moines neighborhoods to promote Republican Congressman David Young’s candidacy was arrested after refusing to identify himself or answer questions about why he was in the area.

Keilon Hill says he was racially profiled. Police say they were investigating two calls about a suspicious person in the neighborhood and the arrest followed police procedures. Hill recorded his interaction with the officer who arrested him.

In the video, the officer can be heard telling Hill West Des Moines has an ordinance against door-to-door sales. Hill, who was carrying campaign pamphlets, replied he wasn’t offering any services. Hill was arrested and charged with preventing an officer from performing his duties.

“If I have not broken a law, you have no reason to detain me,” Hill can be heard saying in one of the videos.

The officer, right before handcuffing Hill, said said: “You’re not listening to my directions…I’m done.”

Hill was employed by a political action committee supporting Young’s campaign. Hill provided video of the exchange to Iowa Citizens for Community Improvement. The group released the videos, which were recorded on the afternoon of Monday, October 29.