You are here: Home / News / Reynolds suggests King has a decision to make about his political career 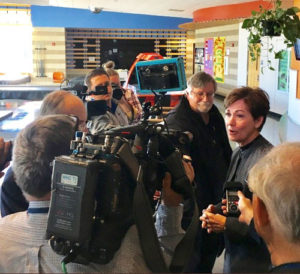 Governor Kim Reynolds is offering some blunt advice to a fellow Republican.

“I think that Steve King needs to make a decision if he wants to represent the people and the values of the fourth district or do something else,” Reynolds said today in Ottumwa.

Congressman King, often at the center of controversy, endorsed a white nationalist who was running for mayor of Toronto last month. He’s now feuding with a conservative magazine that has referred to King as “America’s most deplorable congressman” and “an embarrassment” to the GOP.

Prior to this year’s election, Reynolds told reporters she was not responsible for inflammatory comments from King, who was among her campaign co-chairs.  Today, Reynolds said she has not talked with King since the election, but she is suggesting King’s political career is at a crossroads.

“He needs to get back in the district and really, I think, work to represent his constituents,” Reynolds said during an interview with Radio Iowa.

King won reelection to a ninth term in the U.S. House last week, by just a two percent margin. Reynolds won the fourth congressional district with about 20 percent of the vote.

“I think this would be a pretty good confirmation from his constituents that they would like to see more of him,” Reynolds told Radio Iowa. “I mean, I spent a lot of time there. I do a lot of the leg work. I want them to know that I do know there are more than just four corners to the state and it’s not just talk.”

A spokesperson for King responded with a written statement.

“Congressman King loves Gov. Reynolds, is thankful to her for signing his Heartbeat Bill into law, and notes that they are birds of a feather because they won by similar margins,” King’s communications director John Kennedy said.