You are here: Home / News / Iowa again above national average for amount of volunteer time 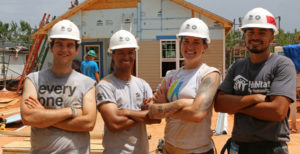 A federal survey ranks Iowa number-four in the country for volunteerism, with more than 40% of Iowans donating their time, well above the national average of around 30%.

Barbara Stewart, CEO of the Corporation for National and Community Service, says from religious groups to educational endeavors, Iowans are very generous with their giving. “People are providing service in many different ways to the organizations they care about,” Stewart says. “Mentoring, working in fundraising, helping collect and prepare food for food banks and soup kitchens, there’s a huge range of activities people are engaging in.”

Iowa’s fourth-place ranking this year is up six positions from the previous survey in 2016. The report finds Iowans donated more than 75-million hours of their time with an economic impact of nearly two-billion dollars. While many Iowans donate their time through organizations, many others take part in what’s considered “informal volunteering,” which may just be lending a hand to the person next door.

“Neighbors help neighbors. People help the elderly couple down the street or babysit or tutor for a child in their neighborhood,” Stewart says. “While that may not be with an organization, it is similarly impactful and a really important part of being an American and being a neighbor to one another.” While Iowa ranks fourth overall for volunteerism, the state ranks third in Millennial participation and second in the nation for parental engagement.

“People are most likely to volunteer during the years when they are parents,” Stewart says. “In their early 30s to their early 50s tend to be the years where the largest percentage of Americans volunteer and that’s largely because that’s the time when they’re being asked most frequently.”

The study also finds 55% of Iowans donate at least $25 to charity, while the average Iowan donates 34 hours of time every year. Only Utah, Minnesota and Oregon rank higher than Iowa on the Volunteering in America report, while the bottom three states are Nevada, Mississippi and Florida. Learn more about how to volunteer in your own community here: www.nationalservice.gov