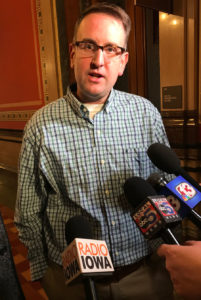 Democrats who’ll be serving in the Iowa House next year met Saturday and elected State Representative Todd Prichard of Charles City as their new leader.

“The message was unity,” Prichard told reporters after the private meeting among House Democrats concluded. “Let’s work together as a team. Move the state forward. We’re looking to work with Republicans when we can, in ways that we can. We’re looking to stand on principle when we disagree.”

Prichard rejected the idea he’s been elected to help Democrats rebuild the party in rural Iowa.

“This isn’t an urban-rural job. This is an all-Iowa job, so we’re looking to connect with people wherever they are,” Prichard told reporters Saturday afternoon.

Prichard put 40,000 miles on his car traveling the state before abandoning his campaign for governor in the fall of 2017 and seeking reelection to the House instead. Prichard said he’ll ask his fellow House Democrats to travel the state, too.

“I’ve got to have a collaborative effort from a team of Democrats and I think when we engage all of our resources of people, people will be impressed with what the Democrats offer and what we stand for,” Prichard said.

Prichard, who is an attorney, is also a lieutenant colonel in the Army Reserves, with tours of duty in Kuwait, Iraq and Egypt. Prichard is among four men and two woman who were elected to leadership roles for Democrats in the Iowa House next year.