You are here: Home / Sports / Sports Performance Center at ISU moving ahead 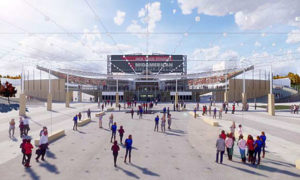 This is what the new plaza will look like at the north end of Jack Trice Stadium.

The Board of Regents gave approval Friday for Iowa State University to proceed with a $90 million project that will dramatically change the north end of Jack Trick Stadium.

Associate Athletic Director for Operations, Chris Jorgensen, says the Sports Performance Center will mean some big changes to the buildings that sit there now. But, he says one key feature he gets the most questions about is not going away. “Hillside seating that will remain…the plan would be to add a concourse similar to what we did on the south end of the stadium. A game day plaza would go in north of the Jacobsen Building replacing what currently resides there as the Olson building,” Jorgensen says. The plan also includes updates to the Bergstrom Football Complex to replace space lost in the Olsen building.

“The soccer, softball, tennis and golf programs all train out of that building when they are not in season at their other facilities. We also have some other sports that use the weight rooms and training facilities in that building, so that building would be removed,” Jorgensen says. The Sports Performance Center will be a four-story building attached to the football complex.

The northeast corning of this building would be a shared nutrition center,” Jorgensen says. “One big change in college athletics in the last several years has been additional opportunities to feed student athletes. And it is actually one of the highest demands on out student athletes — is on the nutritional side.”

Other components of the building include conference rooms, the Life Skills Suite, offices and mechanical space. Level three would house a classroom, computer lab, 24 Tutor Rooms, and offices. And level four would have dining, the kitchen and two athletic suites. Levels three and four would provide views south to Jack Trice Stadium, east to the new North Entry Plaza and north to the Iowa State Center.

Jorgensen says they are well on their way to raising the funds for the building. “We have a 45-million-dollar fundraising goal, and as of today I think they are at 41 of that 45 million. And we plan at a later day,” according to Construction would start in June of next year and the project would take two years to complete.