A small group of volunteers from Texas is spending time in Marshalltown helping tornado victims with home repairs as winter approaches.

Payton Ruddock spoke with KCRG-TV9 after he and his friends drove up from the Lone Star State this weekend. “We wanted to make sure people are getting shut in before the real cold hits,” Ruddock said. The Texans say they’re simply returning a favor, as Marshalltown sent aid their way following Hurricane Harvey in August of last year.

“First United Methodist Church, friends and family in Marshalltown sent all kinds of donations down to help us out when we flooded,” Ruddock said. The EF3 tornado that struck Marshalltown this summer damaged or destroyed roughly 1,800 homes.

“I grew up in Marshalltown and when my mom called me in July after the tornado came through…the first thing that came to mind was Harvey, because we had been through Hurricane Harvey almost a year beforehand,” Ruddock said. City officials in Marshalltown have said some of the hardest hit 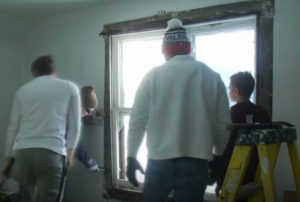 tornado victims are low-income residents, including some who don’t have insurance. Tony Weltzin told KCRG-TV9 he lost his garage and much of the front of his home.

“The tree beat up all my windows in the front of the house,” Weltzin said. “I had to get six windows replaced.” Ruddock and the other Texans were in Weltzin’s home this weekend replacing those windows. Weltzin is confined to a wheelchair.

“I know all the construction stuff, I just can’t reach most of the things,” Weltzin said. A total of 21 tornadoes touched down statewide on July 19. In addition to the Marshalltown twister, an EF3 hit Pella and a pair of EF2s struck Bondurant. The rest of the tornadoes were rated as EF1s or EF-0’s.