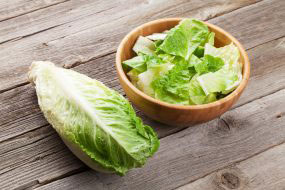 The U.S. Centers for Disease Control is recommending that you not eat any romaine lettuce. Iowa Deputy State Epidemiologist Ann Garvey says the warning comes after an E.coli outbreak.

“While there’s been no illnesses identified in Iowa to date — there’ve been 32 people from 11 other states across the U.S. and 18 people from Canada that have been infected from the same strain of E.coli,” Garvey says. “And these people reported eating romaine lettuce before they got sick.” Doctor Garvey says they urge everyone to follow the CDC guidelines.

“If anyone has romaine in their refrigerator, we would recommend that they dispose of it. We are also recommending that restaurants don’t serve it and that it is pulled off the shelves at grocery stores,” Garvey says. Other types of lettuce are okay to eat. If you are uncertain about the lettuce, doctor Garvey says you should throw it out.

“If you have like a mixed green bag of lettuce and you are unable to determine whether there is romaine in that mix — we’d recommend that you err on the side of caution and dispose of that as well,” she says. Doctor Garvey says it is also a good idea to clean the area of your refrigerator where you stored the romaine.

“Make sure that you’re wiping down the refrigerator. You can take out the shelves and just wipe it down with soapy water and rinse those and dry them before you put them back in,” according to Garvey. “That’s another added step that would be recommended, especially if you’ve got a lot of romaine lettuce that would have had direct contact with your drawers and shelves.”

Garvey says it is not yet know how the romaine lettuce got contaminated. “There’s a lot of different sources for E.coli. E.coli can affect people and animals and the environment can be contaminated with the bacteria and so that’s just part of the investigation,” Garvey explains. “When they are able to identify the potential source of the contaminated romaine lettuce they’ll go back and look at what factors might have been in place to cause that contamination.” Garvey says health officials don’t want you to stop eating lettuce.

She says it’s always a balancing act as they don’t want people to stop eating healthy and stop eating vegetables, they just want to avoid putting any more people at risk. “Again, we would just recommend not eating the romaine. Other types of lettuce and other types of leafy greens are not included in these recommendations,” Garvey says.

You can find out more about the romaine lettuce problem on the CDC’s website.