Thanksgiving celebrates the harvest season and this year the harvest includes a new crop that’ll soon be legally sold in Iowa for the first time.

Medical marijuana products made from the plants grown in Iowa will be available for the first time starting December 1st. MedPharm Iowa’s Joe Kerner is the head cultivator of the crop and says it starts a lot like most gardens in the state.

He says one difference is they grow their plants from cuttings and not seeds. “We just grow them up and we allow them to flower out. And with the process that allows us to select certain genetic lines that allows us to target either that THC or the CDB (canabis oil) molecule,” Kerner explains. 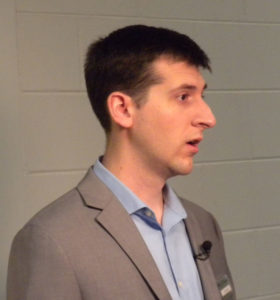 Kerner has a degree in horticulture from Iowa State University and picked up more specific knowledge about marijuana from those who have been growing the plants in other states. He says a key job is keeping the plants fed.

“We have a fertigation process that we use. That means we fertilize and water at the exact same time,” Kerner says. “And that’s going to vary throughout the plant’s life cycle, especially as it gets bigger.” Kerner says the marijuana grows in a highly controlled environment where they don’t have to worry about things like too much rain, or hail and windstorms like the average garden. But there are some things that they have to guard against.

“We have to control for pests, whether that’s an insect or a mold or fungus — but due to the very strict environmental controls we have in place — we can really keep a good finger on that,” Kerner says. The plants reach the flowering stage in 20 to 22 weeks and are then harvested to make the medical marijuana products. 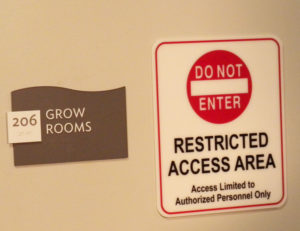 “We remove all the flower structures from the stem and then we grind them up and extract them. So, that way we can receive the oil and we can formulate with it,” he says.   Kerner says watching the vivid green plants grow is more interesting than you might think.

“You can see changes, this is a really fast-growing plant it being a true annual,” Kerner says, “so it really helps with that visual reward I guess. We get to see our plans really change and develop.” The processing plant is on the southwest edge of the downtown area of DesMoines and has several security features surrounding it