You are here: Home / Agriculture / Congressman King: budget and Farm Bill priorities before session is over 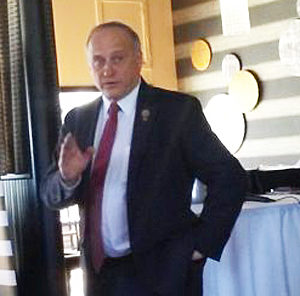 Iowa Congressman Steve King, a Republican, will be in the minority party when Congress reconvenes in January.

King says the current Republican majority will try to get some things done before the change over — and passing a funding bill before the December 7th deadline is key. “It looks like the struggle there is going to be will there be funds for the wall and what is President Trump going to do with that,” King says. “It’s a short period of time between now and that day and a lot is going to happen.”

King says he also wants to see progress on the Farm Bill, and says he will push for a federal version of the heartbeat bill, which would restrict abortion once a heartbeat can be detected. “This is essentially the same bill that Iowa passed and the governor signed into law. I authored this legislation more than two years ago, worked it through the state legislature and now working it through Congress,” according to King. “So, I expect to have that marked up in judiciary, with enough time to bring it to the floor of the House while we still have a pro-life majority.”

King expects California Congresswoman Nancy Pelosi to return as the Democratic Majority Leader, despite some opposition in her own party. He also expects most GOP legislation will be blocked and that Democrats will make moves against the president.

“I think that people can brace themselves for a lot of investigations and most likely we will see impeachment efforts coming,” King says. “I do sit on the Judiciary Committee. That’s going to be a very busy committee and it’s not going to be a very fun time dealing with those kinds of issues.” King made his comments in Sioux City after speaking to the Downtown Rotary Club.