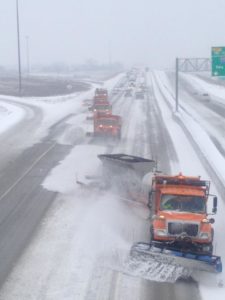 Each of the 902 state-owned snowplows are now equipped with flashing blue lights as well as GPS Automatic Vehicle Locating systems and dash cameras.

“Those all translate into some really terrific things,” Lowe says. “One is just fewer crahes — fewer sideswipes, fewer rear-ends — and more up time, less downtime for our snowplows so they’re out on the road more safely and more safely for the traveling public.”

Lowe says his agency is providing better information to the traveling public by analyzing all the data it can get from the plows as well as sensors tracking pavement temperatures.

In addition to those technical solutions, the Iowa DOT has employed some old-school tricks, too.

“We haven’t forgotten how to be practical and so one of the things that’s been really successful for us is a living snow fence program which is just simply working with landowners to keep standing corn and bales of hay in critical areas,” Lowe says. “…We get to reduce blowing and drifing, improve visibility, just improve our overall conditions on those roadways at a very low cost.”

For the past three years, the Iowa DOT’s winter maintenance budget has wound up having the lowest cost per lane mile when compared to the upper Midwest states of Michigan, Wisconsin, Illinois and Minnesota.