You are here: Home / News / Forecast has rain, freezing rain and snow in the weekend outlook 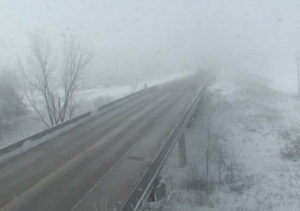 For the second consecutive weekend, Iowa’s bracing for a snowstorm. While southern and eastern Iowa got socked over the Thanksgiving holiday with up to 17-inches of snow, this time northwest Iowa is expecting the worst of it.

Meteorologist Alex Krull, at the National Weather Service, says the rain, freezing rain and sleet should change to all snow later today and into tonight and tomorrow. “The heaviest band right now that we have forecast would extend from Sioux City up into the Estherville area,” Krull says. “That’s the area where we’re looking at anywhere from six to seven inches of snow.”

Farther to the south and east, roughly from Council Bluffs to Fort Dodge to Mason City, forecasters predict three to five inches of snow, with much less snow heading toward central and southeast Iowa. Krull says it’s still a bit of a toss-up as to where the 32 degree dividing line will settle. “It is possible here in central Iowa, because we’ll be hovering right around that freezing benchmark, to be looking at freezing rain and ice accumulations,” Krull says, “and then heavy rainfall in other parts of central Iowa and southern Iowa.”

Because of that ice, in addition to strong wind gusts blowing the snow, motorists are going to need to use extreme caution as they venture out. “If you are traveling in these areas, especially northwest Iowa, just give yourself extra time,” Krull says. “At the current moment, we do have a Winter Storm Watch out for counties in northwest Iowa. At some point later today or possibly overnight, we will be changing some of those counties over to either a Winter Storm Warning or a Winter Weather Advisory.”

The colder weather will be sticking around — along with the snow. While the normal high temperatures for this time of year are around 40 degrees, Krull expects highs to remain in the 20s and 30s well into next week. Keep up to date with the forecast at weather.gov.