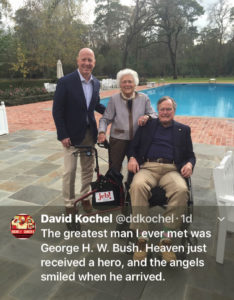 An Iowan who spent hours driving George Herbert Walker Bush through the state during Bush’s first presidential campaign is remembering the 41st president as a kind, decent man who guided the world at a critical time.

“Like many Iowans, I got to know George Bush in 1978 and 1979 and 1980 as he and his family met with Iowans in their living rooms and in cafes and in meeting rooms and, as the months passed, in larger rooms,” Ralph Brown of Dallas Center told Radio Iowa.

Brown was among a small crew of Iowans who helped steer Bush’s campaign to victory in the 1980 Iowa Caucuses.

“Like all the other Iowans who got to know him, I was impressed by his depth of knowledge, his experience, his warmth, his friendliness, his ability to relate to people, his decency, his ability to talk to people and, more importantly, listen to people,” Brown said.

Bush, who became Ronald Reagan’s running mate in 1980, was the first vice president in 152 years to win the presidency. Historians have already begun to process Bush’s key role in the peaceful ending of the Cold War, according to Brown.

“The years before George Bush’s presidency we were always having the danger of a nuclear war with the Soviet Union,” Brown said during an interview with Radio Iowa. “He patiently worked with leaders of the world and Mikhail Gorbachev said this weekend that (Bush’s) restraint allowed him to oversee the break-up of the Soviet Union.”

Brown has a week’s worth of Doonesbury cartoons hanging in his office, published during a trying period in 1987 when the cartoonist referred to then-Vice President Bush as a mere asterisk.

“Vice President George Bush for several of us…autographed that print, inscribed it to me and signed it, ‘George Bush’ — with an asterisk under his name,” Brown said, adding it’s a reminder of Bush’s self-effacing wit.

Richard Schwarm of Lake Mills had backed Ronald Reagan in 1980, but wasn’t backing any of the GOP candidates running for president when Brown invited Schwarm to a private meeting with Bush in the fall of 1987. Schwarm said others in the room were trying to blame Bush’s campaign problems on anyone but the candidate.

“They started talking, trying to give him excuses, and (Bush) just said: ‘Nope. This is on me.’ He said there was no way that he was blaming President Reagan’s unpopularity or anything like that and I just walked out so impressed,” Schwarm told Radio Iowa. “That’s the first time I really saw him face to face, talking, being himself.”

Schwarm was later chairman of the Iowa Republican Party in 1992, when then-President Bush sought reelection.

David Kochel of Des Moines was the chief strategist for Jeb Bush’s 2016 presidential campaign. After Kochel was diagnosed with leukemia in October of 2015, the president’s son had Kochel visit his parents at their Houston home as Kochel went to Houston for his cancer treatments.

“Even though I wasn’t feeling the best at the time, neither was he,” Kochel said of the former president. “You just sort of forget about those things and share some time together and to talk about someone we both cared about and respected, which was their son, Jeb, it was really the honor of my life.”

Kochel indicated Barbara Bush did most of the talking and shared “candid opinions” about her son’s Republican competitors.

“Quiet, private time with them, talking about politics, talking about Jeb, trying to understand what they thought was most important we should be doing and talking about,” Kochel said during a Radio Iowa interview. “It was really a special thing to have had the opportunity to do.”

The former president and first lady were long-time financial patrons of the cancer center where Kochel was being treated — honoring their daughter Robin who died of leukemia when she was three.