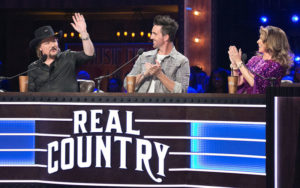 Another Iowa native is advancing in a TV singing competition. Jaida Dreyer now lives in Nashville, but she spent the first 12 years of life in Latimer, Iowa. She’s competing on the USA Network’s “Real Country” program which features mentors Shania Twain, Jake Owen, and Travis Tritt.

“It’s kind of a combination of ‘The Voice’ and what ‘Nashville Star’ used to be,” Dreyer says.

Dreyer’s mentor on the show is Jake Owen. She was declared the winner of last week’s episode.

“It was crazy. I won. I did. I won!,” Dreyer says, with a laugh. “I had the highest score of the show, like the entire series so far, and it still doesn’t feel real. It’s crazy. And so I’m going to the finale.”

The finale airs next Wednesday, December 12, at 10 p.m. central time on USA. Dreyer is one of seven finalists hoping to take home the top prize, which includes $100,000 and a chance to perform at the legendary Grand Ole Opry in Nashville. Results are determined by an in-studio audience vote.

The show isn’t Dreyer’s first TV success. Nine songs she wrote were featured on the TV series Nashville. She’s had songs used on “The Returned” and “Longmire” as well. She’s even written music for several of country music’s top performers including Luke Bryan, Tim McGraw, and Faith Hill.

“I had a three-week number one for our ‘Entertainer of the Year’ that year, Luke Bryan,” Dreyer says. “It was a duet with Karen Fairchild from Little Big Town. I actually sang on that record, I did backgrounds on that record which was really cool. We were nominated for an ACM and a CMA.”

Dreyer has fond members of her days in Larimer, where her grandparents owned the local grain elevator.

“I still think about the many years I went to the Franklin County Fair. Thinking about being a little girl raised in Latimer, Iowa and hearing these artists on my radio you know now listening to them on the radio singing my songs and my stories,” Dreyer says. “It’s kind of full circle.”

She sang “I’ve Been Everywhere” on last week’s “Real Country” episode. Dreyer’s music is available on all digital platforms.