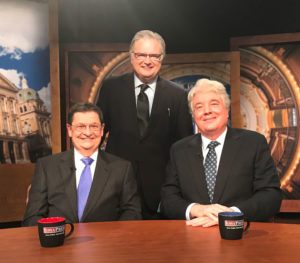 A controversial episode in Iowa Caucus history has apparently been solved.

The Iowa Republican Party’s computer crashed on Caucus Night back in 1980. George H.W. Bush was declared the winner, but Ronald Reagan’s supporters have long maintained that if all the straw poll ballots had been counted that night, Reagan would have won.

Not so, according to Ralph Brown, a lawyer from Dallas Center. Brown was among the half-dozen people who launched George H.W. Bush’s first presidential campaign in Iowa four decades ago.

“Each county precinct reported their straw poll totals to the state party. The state party turned all those sheets over to the State Historical Library. We dug into archives of the Historical Library, found those original sheets and filled in the blanks,” said Brown this afternoon, during taping of tonight’s “Iowa Press” program.

David Yepsen, the program’s host and a former Des Moines Register reporter who covered the 1980 Caucuses asked: “Did Bush win?”

Mahaffey, lawyer from Montezuma, supported Bush rather than Reagan in the 1980 Caucuses. Mahaffey said many described the 1980 process this way: “Running for president in Iowa is kind of like running for sheriff and that’s what you’re going in each county. You’re trying to get to know as many people as you can.”

Mahaffey doubts the 1980 Bush campaign template which focused on attending political party functions would work for a modern Iowa Caucus campaign because television, social media and money have become so dominant.