You are here: Home / Crime / Courts / State Patrol asking for money to upgrade its airplanes 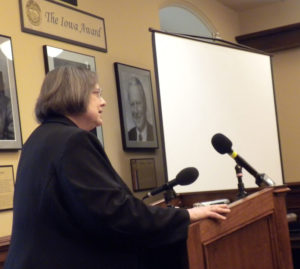 The Iowa State Patrol is looking to replace some of its aging aircraft. Department of Public Safety Commissioner, Roxann Ryan, says they are asking for $3.5 million outside their general budget for the planes.

“We currently have seven airplanes, we are the only law enforcement agency with aircraft available to us. Of those seven planes we have — two of them have reached end of life — we can’t rebuild them anymore and sitll run them safely,” Ryan explains. Ryan says they will swap out the older planes as they buy new ones.

“When we have another one that goes out we will not replace that one, because if we can replace the two that have reached end of life, they are different kinds of aircraft. We will be able to fly them more often in weather that we can’t currently fly in,” Ryan says. She says the airplanes are a valuable resource.

“I think a lot of times people assume that we are using the planes primarily for enforcement action — speed enforcement,” according toe Ryan. “what we’re find is, more and more it’s not being used for speed enforcement as it is for surveillance of particular activities, and looking for missing people.” Ryan says the aircraft have been used to find missing elderly or young people, as well as helping find suspects.

“There are times when we will do speed enforcement as well, but most of the time it is something completely different,” Ryan says. Ryan says another request they have is to upgrade their technology. Getting more storage is part of that.

“Because now when we have so much digital evidence that we have to deal with — when everybody has multiple devices and they take pictures of apparently everything the world — it requires a lot more effort to be able to maintain all of the storage that we need,” Ryan says. Ryan recently announced she is going to retire. She says it is time to focus on some other things.

“I feel like a I know an awful I have aging parents and young grandkids, and this is truly a 24-seven type of job,”Ryan says.

Ryan joined the Department of Publice Safety in 2006 as a lawyer and was appointed Public Safety Commissioner in 2015 by then Governor Terry Branstad.