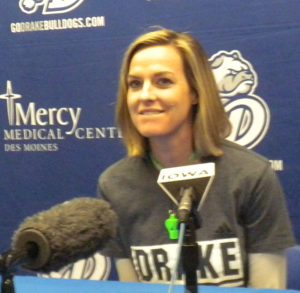 The Iowa State and Drake women meet Sunday in Hilton Coliseum. Cyclone coach Bill Fennelly says games with in-state opponents are always good ones and he expects a great challenge from a Drake team that has been in the ratings at one point this season.

Fennelly says this will be a good test with the Big-12 race approaching as Drake is a good offensive team and they will have to see if they can play at a high level against a quality opponent.

The key for Drake is defending ISU star Bridget Carleton. “She’s so crafty and she’s so talented and she’s so deceiving, she’s got such a quick step. You are not ever going to shut her down. You’ve got to play good team defense. Because if it turns into a one-on-one battle, she is probably going to win most of the time,” according to Baranczyk