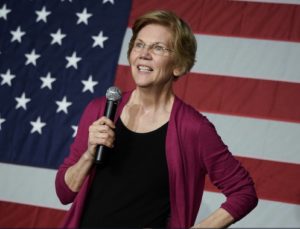 This weekend Massachusetts Senator Elizabeth Warren made her first trip to Iowa in the “exploratory” phase of her presidential campaign, emphasizing an economic platform she says will revive the middle class.

“So the bad news is I’ve caught a cold,” Warren announced to a crowd of more than 700 in Des Moines Saturday night. “The good news is nevertheless, I persist.”

“We have a chance now, over the next year-and-a-three-quarters, to get out there and talk about something we haven’t talked about nearly enough,” Warren said Saturday night, “and that is what we’re fighting for.”

During an interview with Radio Iowa Sunday, Warren said it was time to end the war in Afghanistan, create a new public health insurance option and raise the minimum wage.

“Right now, we’ve got a Washington that works great for the rich and the powerful. It is not working for much of anyone else, but I believe we can change that,” Warren said. “…Yeah, the billionaires — they’ve got money to influence this, but there’s a whole lot more of us than there is of them and if we get organized, if we dream big for the changes we want to make and if we fight hard that’s how we’ll make real change in this country.” 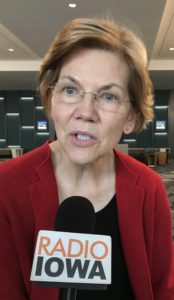 Billionaires Michael Bloomberg and Tom Steyer have traveled to Iowa, too, and might compete against Warren for the Democratic Party’s 2020 presidential nomination. Warren said the election “shouldn’t be for sale” to wealthy people who can write checks to a “super PAC” or who can spend millions on their own campaign.

“We say, over and over, ‘We’re the party of the people.’ Well, let’s not just talk the talk. Let’s walk the walk and what that means is building grassroots campaigns,” Warren told Radio Iowa. “So I believe that the Democratic primary candidates should lock arms and say we’re going to do this through small dollar donations, we’re going to do this as a campaign built by the people, for the people and the advantage to that is it will really help propel us into the General Election.”

Warren was not among the presidential prospects who visited Iowa before the 2018 election, but Warren announced on New Year’s Eve she had hired staff to start organizing for the Iowa Caucuses. Warren spoke to big audiences this weekend, met privately with key Iowa Democratic Party activists and made an unannounced visit to a Des Moines coffee shop that’s a frequent stop for presidential candidates. Des Moines native Sam Billingsley was standing in line to order when Warren walked in.

“She’s someone that my friends, my family, like my mom’s super, super excited about her,” Billingsley said after posing for a photo with the senator. “Just from that alone, I know she’s someone I could support.” 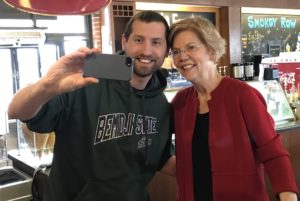 Nathan Svare of Des Moines meets a group of friends at Smokey Row Coffee Company every Sunday and, after meeting Warren, he asked for a selfie with the senator.

“I consider myself an independent. When Bernie (Sanders) ran, he’s somebody that I’d like to see,” Svare said. “What have seen of what she wants to push, those are things I can get behind.”

Emily Shields, another Sunday morning Smokey Row patron, said Warren is off to an “impressive” start and that may influence others pondering a presidential run.

“I think people are probably thinking they need to make a decision sooner rather than later because she’s getting the party started,” Shields said.