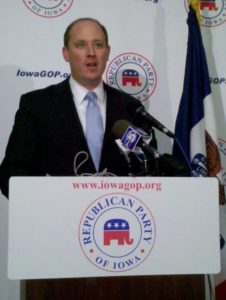 Matt Strawn of Ankeny worked in Washington, D.C. as a congressional aide before serving as the Iowa GOP’s chairman for the 2012 Iowa Caucuses. His first day as Lottery CEO is next Monday. Previous Iowa Lottery president and CEO Terry Rich retired on December 31, 2018.

Reynolds announced eight other appointments to key administrative posts in state government today. Debi Durham has been the Iowa Economic Development Authority’s director for the past eight years and she’ll do double duty as director of the Iowa Finance Authority. Reynolds fired the previous Finance Authority director last March after employees complained Dave Jamison was sexually harassing them.  Carolann Jensen had been serving as the agency’s interim director.

Any person appointed by the governor to lead a state government agency must win confirmation to the job by a two-thirds vote in the Iowa Senate.

Read the governor’s full announcement on administrative appointments below.

“I am pleased to have these qualified Iowans serve as key leaders in my administration,” said Governor Reynolds. “I applaud them for stepping up and choosing to serve our state in this important capacity.”

Stephan Bayens has been appointed to lead the Department of Public Safety, effective January 14, 2019.  He previously served as an Assistant United States Attorney and as a Assistant County Attorney for the Polk County Attorney’s Office. He also previously served as a clerk on the Iowa Court of Appeals and worked at the Iowa Attorney General’s office. Stephan received his law degree from Drake University in 1999.

“I am honored to be appointed to lead the Department of Public Safety in Governor Reynolds’ administration,” said Bayens. “Safety of our people is our top priority and DPS will never waiver in that goal.”

Dan Craig has been selected to serve as interim director of the Department of Corrections effective January 7, 2019 while a nationwide search begins for a permanent director.  Dan brings 34 years of experience in the correctional system which includes serving as the deputy director for the Department of Corrections. Mr. Craig has an Associate of Applied Arts Degree, from Hawkeye Community College and has a Bachelor of Science Degree in Public Administration, from Upper Iowa University.

“I’ve devoted my professional life to Iowa Corrections,” said Craig. “I believe we have one of the strongest correctional systems in the country, and to be able to continue to serve this department as the interim director is an honor that I humbly accept.”

Debi Durham will remain as head of Iowa Economic Development Authority (IEDA) and also serve as director at the Iowa Finance Authority (IFA), effective January 7, 2019. She has been IEDA Director since January 2011. For 15 years, Debi served as President and CEO for the Siouxland Chamber of Commerce. Her extensive experience in state government and on economic issues will make her an asset to both departments.

“I am humbled to continue serving and want to thank Governor Reynolds for the opportunity to work in her administration. I look forward to partnering with the professional teams at both IEDA and IFA to help our state grow by prioritizing job creation and community investment. Together, we will find innovative ways to ensure our state’s economy and communities remain strong.”

Joyce Flinn has been named Director of Homeland Security and Emergency Management, effective January 7, 2019.  Joyce was named acting director of the department in June 2018 and has been serving in various emergency management roles since 1997.  Joyce has been chief of operations during numerous disaster responses, the two most significant being the Missouri River flooding on May 25, 2011, and also during an EF-5 tornado and subsequent flooding that devastated the state in May 25, 2008.  Joyce has a degree in criminal justice from Simpson College.

“I am honored to serve as the Director of Homeland Security and Emergency Management and lead consequence management efforts,” said Flinn. “Iowa has seen no shortage of weather disasters this past year.  We must strive to coordinate with our partners to ensure an effective response in order to protect the people of Iowa and their property.”

Jeff Franklin has been selected for the role of interim director of the Office of the Chief Information Officer, effective January 3, 2019. He previously served as the Deputy Chief Information Officer and also worked at the Department of Administrative Services. He has also held the position as an Information Security Officer and Administrator for the Department of Natural Resources. Jeff received his Masters Degree in Management Information Services from Iowa State University in 2006.

“I look forward to serving Governor Reynolds’ administration by leading the Office of the Chief Information Officer,” said Franklin. “As interim director, it will be my continued goal to provide accountability for the IT resources our state government uses, ensuring productivity for all our agencies.”

Adam Humes has been appointed to lead the Department of Revenue, effective January 3, 2019. Adam currently serves as the deputy director for the Department of Revenue and prior to that he served as an Assistant Attorney General to the Iowa Attorney General. Adam has an extensive background in state government and as a litigator. Adam graduated from the University of Iowa College of Law in 2007 after graduating from the University of Northern Iowa in 2003.

“I look forward to my continued service to the state of Iowa,” said Humes. “I am proud of what we are doing at the Department of Revenue to improve administrative processes and simplify compliance burdens for Iowa taxpayers. We will strive to be accessible and accountable to Iowa taxpayers.”

Chris Kramer has been named Director of the Iowa Department of Cultural Affairs, effective January 7, 2019. She was named acting director of the department in August of 2017 and previously served as the deputy director. Prior to being with the state, Kramer was VIce President of the Science Center of Iowa for 12 years. As a member of the project team responsible for creating the new learning center which opened in 2005, Kramer managed the $62 million capital campaign, the single largest museum capital campaign ever undertaken in Iowa.

“I am excited to lead the Iowa Department of Cultural Affairs and thank Governor Reynolds for this amazing opportunity.  I look forward to driving our mission to build and sustain culturally vibrant communities and to be catalyst for creativity, education, community development and place making, especially as it relates to arts, history, culture and historic preservation – all of which make our state so great.”

Matt Strawn has been appointed to lead the Iowa Lottery, effective January 14, 2019. He is the co-founder of Next Generation Public Affairs and has an extensive background in public relations. As an entrepreneur, Matt helped bring an Arena Football League (AFL) professional franchise, the Iowa Barnstormers, to downtown Des Moines. He is a 2003 graduate of the Catholic University of America, Columbus School of Law and graduated from the University of Iowa in 1996.

“I sincerely appreciate the opportunity to serve Iowans,” said Strawn “I am humbled and honored to lead an organization known for its integrity, innovation and responsible generation of revenue to fund Iowa’s priorities.”

Dale Woolery has been named Director of Drug Control Policy, effective January 7, 2019.  He previously served as an associate director for the department and has 24 years of experience in this agency. Prior to that, he worked as the station manager for KRNT radio. Dale graduated from the University of Missouri- Columbia in 1977.

“I am grateful to be continuing my work in the Governor’s Office of Drug Control Policy,” said Woolery. “In an ongoing opioid crisis, it is more important than ever to coordinate drug enforcement and substance abuse prevention or treatment. I look forward to working with Governor Reynolds in developing initiatives to keep citizens safe.”