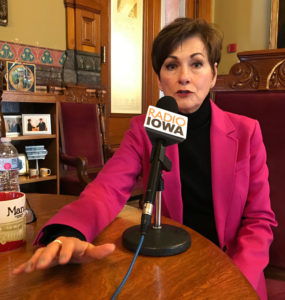 As Iowa’s first female governor prepares to take the oath of office for a full, four-year term on Friday, Republican Kim Reynolds says she wants to be known as “the opportunity governor.”

Kim Reynolds inherited a half-term as governor when Terry Branstad resigned in May of 2017. Reynolds is relishing the gift of time voters gave her in November.

“I don’t have, like, 17 months or a year to get something done,” Reynolds said during a recent Radio Iowa interview. “We have four years to really be strategic and think about what we want to do.”

Reynolds said she has the time now to follow through on priorities like dramatically increasing the number of Iowans who have college degrees or technical training beyond high school.

“Somebody asked me: ‘What do you want to be thought of, as the governor?’ And I said: ‘Well, hopefully ‘the opportunity governor,'” Reynolds told Radio Iowa. “I do believe that we’re putting in place an environment that will help Iowans reach what they’re capable of doing and I think that just lifts the whole state up.”

Reynolds has assembled a new leadership team within the governor’s office and she’s replacing some state agency administrators. And Reynolds aims to tackle the “antiquated technology” in state government.

“Technology, at any position that I’ve been in, that’s been something that really kind of energizes me and it’s just the future and government is always lacking when it comes to innovation and technology,” Reynolds said, “and so I think there’s a better way.”

The governor joked most state computers are running on COBOL — widely viewed as an outdated computer language. Upgrades are expensive, but the governor said it’s something to start discussing.

“We collect a lot of data, it just doesn’t talk and we can’t use it in the manner that we should,” Reynolds said. “…It’s not about replacing people, but it’s making us better and more efficient and allowing us to do our jobs in a better manner.”

Part of Reynolds’ job, as governor, is to deliver the annual “Condition of the State” speech to legislators. That happens tomorrow morning, starting at 10. Inauguration festivities are on Friday. She’ll take the oath of office on Friday morning. Open houses will follow at the governor’s mansion and the state capitol, then there will be two inaugural balls in Des Moines Friday night.