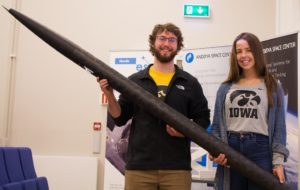 Two University of Iowa students will be flying to far northern Norway for “rocket school” later this month, the only American students taking part in the prestigious program.

David Miles, a UI professor of physics and astronomy, says they’ll design, build, launch and recover a nine-foot-long, carbon fiber science rocket, all in less than a week.

“It’s quite an intense program,” Miles says. “Basically, they do all of the pieces of one of these experimental science missions where you launch a rocket and use the instruments on the rocket to study something, but instead of doing it in about three years, which is how long it would take us to do a research rocket, they do it in about four-and-a-half days.”

The two UI students selected for the program are Emily Silich of Epworth and Danny Tallon of Mondamin. Miles says they’re prepared for the challenge, though it won’t be a cakewalk. It is, after all, rocket science. 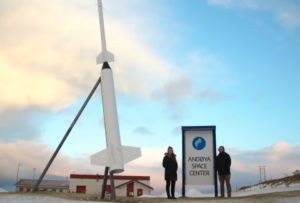 “It’s very broad,” Miles says. “It’s intended as an introduction and the students are well-supported in the things they have to do, never the less, there’s a lot of tasks that have to happen and everything has to be ready when you press the button to launch, because you don’t get a second try on a rocket. It’s a pretty busy week for the students.”

It’s difficult to recruit students to pursue careers in space-related fields, according to Miles, but it’s a promising, rewarding avenue.

“For some of them, that might be continuing on to graduate school, doing research, working for NASA, working for a university,” Miles says. “It also might be working for an aerospace company or any of the related high-technology engineering, mathematics and science disciplines you need to participate in a space-active workforce.”

Silich and Tallon, both UI physics majors, will be in Norway for the course January 21-25. The students’ trip is funded by the U.S. National Science Foundation.

This is the 6th year for the Canada-Norway Student Sounding Rocket (CaNoRock) exchange program. It’s a partnership among higher-education institutions and space agencies in Canada and Norway — and Iowa.

Miles is a native of Canada who took part in the rocket school as a graduate student at the University of Alberta. After joining the UI faculty in 2017, he lobbied to get the Iowa City institution included.