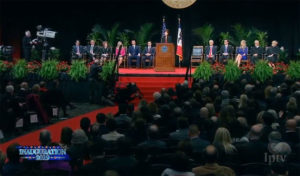 Governor Kim Reynolds today said her goal over the next four years will be to both “preserve” the state’s small town values — and “ignite” a renaissance in rural areas the will keep young people here. During her Inaugural Address this morning — Reynolds described Iowa as “one big small town.”

“We must be prepared to embrace the change that enriches our lives and lets us focus on what’s important, but when it comes to the qualities that define our great State, let’s not let the world change us,” Reynolds said. “Let’s change the world.”

Reynolds warned social media is making too many Americans — and Iowans — feel “powerless.” She asked Iowans to set aside their smart phones and devote less time to political arguments online.

“Don’t let a screen steal time from our family and friends, from our communities and schools,” Reynolds said. “Because here’s the thing: If we look up and to each other, we will see that great things are happening in this state. And if we put our energy into action instead of outrage, we will find that there are even greater days to come.”

Reynolds took the oath of office for a full, four-year term shortly after 10 o’clock.

“I am incredibly honored and humbled to stand before you today to take the oath as the first woman elected governor of our great state,” Reynolds said to start her Inaugural Address, drawing applause and cheers from the crowd.

Reynolds emphasized the challenge and opportunity ahead, as new jobs require more highly-skilled workers. As she did Tuesday in her Condition of the State message, Reynolds acknowledged there are many Iowans who are struggling and — while she did not directly mention her own battle with alcoholism or her decades-long road to a college degree — the governor invited them to look to her for inspiration.

Reynolds, who is 59 years old, became governor in May of 2017. She defeated Democrat Fred Hubbell this past November to win a full term in office. Reynolds told the crowd she had traveled to each of Iowa’s 99 counties — in each of the past eight years — and that’s given her a unique vantage point.

“I get to see Iowa as a whole, and when I do-when I take a step back, squint my eyes and focus-here’s what I see: one, big small town,” she said.

Reynolds began her Inaugural Address by crediting her husband for giving her the push to enter politics 24 years ago, when she ran to be Clarke County Treasurer. Reynolds thanked her three daughters, her sons-in-law and 10 grandchildren — all of whom attended the event, then Reynolds paid tribute to her parents, who were there, too.

“To all of my family, I want you to know this: When I’ve succeeded, it’s because I’ve stood on your shoulders,” she said. “And when I’ve failed, I moved forward because you carried me.”