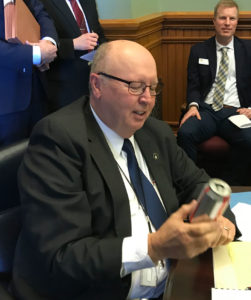 Another proposal to alter the state’s “bottle bill” has emerged in the Iowa Senate.

For decades, legislators have debated making changes in the system that charges a deposit fee on bottles and cans of alcohol and carbonated beverages. For years, the stores that sell those beverages have objected to being the place customers go with their empties to get their nickels back.

Pam Mackey-Taylor, a lobbyist for the Iowa chapter of the Sierra Club, said the group opposes major changes.

“We like the convenience of the grocery stores and convenience stores and the accessibility throughout the state, including in rural communities,” she said during a senate subcommittee hearing yesterday.

But a bill that got its first hearing at the statehouse Wednesday would let grocery stores and convenience stores exit the redemption business. Brad Epperly, a lobbyist for the Iowa Grocery Industry Association, said retailers spend a lot to process the empties.

“We devote square footage. We devote people. We have to do extraordinary cleaning measures…because this is where you buy your groceries,” Epperly said. “There are convenience stores in this state that have to rent space because they have no where to put them.”

The proposal a panel of three senators reviewed would raise the fee paid to recycling or “redemption” centers from one penny to two pennies out of the five cent deposit on each can. Troy Willard owns the “Can Shed” with locations in Cedar Rapids and Iowa City. He told the senators that increase in the handling fee is badly needed.

The businesses that bottle and distribute the pop and beer also say the current system is unfair, but they oppose the bill. Senator Mark Segebart of Vail said going 40 years without making improvements to the “bottle bill” makes no sense.

“As a farmer, you have to adjust things all the time,” he said. “The rule is don’t over adjust. If you adjust 10 things on a piece of equipment, you don’t know what you did that fixed it, so this is a fairly simple bill. It’ll fix a couple of little pieces. It won’t fix everything. But guess what? I’ll be back next year.”

Segebart, gesturing with a nearly empty can of pop, told the crowd at Wednesday’s hearing there will be adjustments in his bill. And groups involved in this decades-long debate over the “bottle bill’s” fate say they’re working to develop other alternatives, too.