You are here: Home / News / King holds first event in Iowa after being bumped off House committees 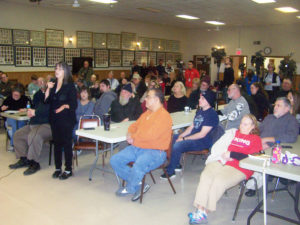 A woman asks a question of Congressman King.

“It is stunning and astonishing to me that four words in a New York Times quote can outweigh 20-some years of public service,” King said.

King has repeatedly said his comments about white nationalism and white supremacy were mischaracterized in the newspaper article. King began the event Saturday by addressing the controversy.

“Not one soul has stood up and said that I’ve ever lied to you or misrepresented anything or given it to you in any spin that’s anything other than what I believe to be the objective truth,” King said. 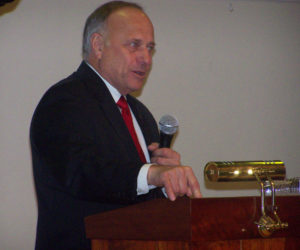 About 100 people, most of whom were King supporters, attended the Saturday morning forum. King told the crowd he was most concerned about losing his seat on the House Judiciary Committee, as he predicts Democrats on the panel soon will bring up impeachment proceedings against President Trump. King hinted he might be “restored” to that committee at some point, but also suggested he’s now free to do more public speaking.

“I’m the only one now who has the ability now to go down and speak on every bill on the floor,” King said, “every amendment on the floor.”

King had suspended town hall meetings in the district a couple of years ago, complaining “paid protesters” were hijacking the events. King now faces 2020 competition for his House seat from within his own party and is planning to hold a public town hall meeting in each of the 39 counties in the fourth congressional district.