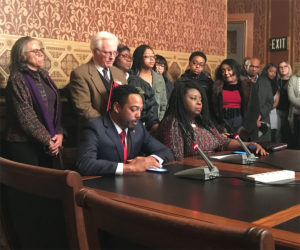 Three members of the Iowa House have just voted to advance a plan to automatically restore voting rights to felons who’ve completed their sentences.

“The first legislative hurdle has (been) passed unanimously,”  Representative Bobby Kaufmann said after he and the other two lawmakers signed onto the resolution — and the audience in a state capitol meeting room burst into applause and cheers.

The crowd gathered early this afternoon for a public hearing on the measure, which Governor Kim Reynolds has urged legislators to embrace. Betty Andrews, president of the Iowa/Nebraska NAACP, was among those who testified.

“We have been working with Governor Reynolds on this issue for some time now and we applaud her stance,” Andrews said. “…We find that it is a challenge for many people and specifically people of color to have to wear a ‘Scarlet Letter’ for the rest of their lives after they’ve completed their sentences.”

Lawmakers and two of those who testified noted the groups supporting restoration of victim voting rights are rarely natural allies on issues — from the American Civil Liberties Union of Iowa to The Family Leader representing conservative Christians, to Drew Klein, the state director for Americans for Prosperity.

“Ex-offenders who have paid their debt to society — when we treat those individuals like second-class citizens, we contribute to a cycle of recidivism that creates new victims,” Klein said, “and ultimately imposes a recurring cost to the taxpayers.”

Karl Schilling of the Iowa Organization for Victim Assistance was the only person to raise any objections during the hearing, urging legislators to “keep the victims of the crimes in mind” as they consider this.

Others like Daniel Zeno of the ACLU pointed out it’s not just heinous crimes, but small-scale property crimes that are felonies in Iowa.

“In the state of Iowa, it is a Class D felony to damage property worth $1000,” Zeno said. “A young person that does something — damages a RAGBRAI bike that’s worth $1500 — could be convicted of a felony and lose their right to vote for the rest of their life. That’s what happens in Iowa.”

Kaufmann responded: “Thank you and I just want to say that’s an extremely important fact that you pointed out. It’s a very compelling argument.”

Several representatives of organizations representing victims spoke in favor of the proposal. Amy Campbell spoke on behalf of addiction treatment.

“A lot of people do commit felonies when they’re in the throes of their addiction. They might have drug crimes, possession crimes that result in a felony,” Campbell said. “…Community participation is an important part of their recovery process.”

And voting is the essence of participating in the life of your community, according to Campbell.

The next stop of for this debate about felon voting rights is the House Judiciary Committee. The Republican leader of the same committee in the Senate has voiced objections to the governor’s proposal.