You are here: Home / Outdoors / Boone River to be focus of Project AWARE 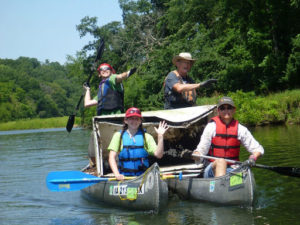 It’s still cold and snowy but organizers of the Iowa Project AWARE campaign are thinking ahead to the steamy days of summer and they’re asking volunteers to mark off their calendars.

John Laird, a naturalist with Hamilton County Conservation, says this year’s river clean-up project will be the Boone River in north-central Iowa.

Laird says, “They pick a river each year and in each July, they go to that river and they try and go as far up to the headwaters as they can and all the way through to the end of the river and clean up as much trash and junk that’s in the river and bring it out.”

Project AWARE stands for A Watershed Awareness River Expedition. Last year, nearly 400 volunteers cleaned up the Maquoketa River in eastern Iowa. This year’s effort is expected to assemble at least 300 volunteers on the Boone who will be plucking out everything from old tires to, possibly, entire vehicles.

“We’re not doing our Boone River Clean-up in August like we normally would as we’re going to partner and help with this project,” Laird says. “It starts Sunday, July 7th in Wright County and will end July 12th. It’s going all the way from Wright County, through Hamilton County and ending down in Webster County.”

It will be the second time the Boone River will be cleaned up by Project AWARE volunteers. The last time was in 2013, along with a portion of the Des Moines River. This will be the 17th annual Project AWARE river clean-up effort. Learn more at: www.iowaprojectaware.org.