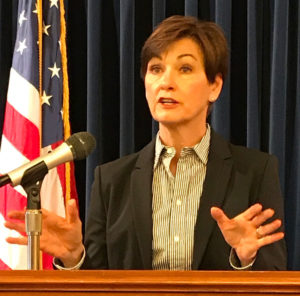 Republican Governor Kim Reynolds supports an attempt by GOP legislators to change Iowa’s constitution after the Iowa Supreme Court ruled last year that the document provides women with a fundamental right to an abortion.

“I’ve made it very clear that I’m prolife. I’m proud to be prolife,” Reynolds told reporters late this morning. “I’m never going to stop fighting on behalf of the unborn.”

A resolution from Senate Republicans proposes an amendment saying Iowa’s Constitution “does not secure or protect a right to an abortion.” That exact language would have to be approved by the Republican-led legislature this year or next year — and then again by lawmakers 2021 or 2022 before Iowa voters could decide whether to add the amendment to the state’s constitution.

Reynolds is critical of conversations Democrats in other states are having on abortion-related issues.

“How horrified and appalled I am with what I see taking place in Virginia, the conversation in New York and other states that are contemplating abortion-on-demand, late-term abortion,” Reynolds said during her weekly news conference.

A district court judge last month overturned an abortion restriction Reynolds signed into law last May. The law sought to ban abortions after a fetal heartbeat may be detected, around the sixth week of a pregnancy. The governor said the legal team reviewing that ruling hasn’t yet decided whether to ask the Iowa Supreme Court to review the lower court’s decision.

The Iowa Supreme Court last May overturned a state law that would have imposed a three-day waiting period for women seeking an abortion.