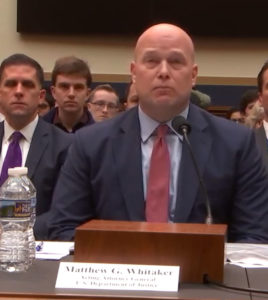 Acting U.S. Attorney General Matthew Whitaker had a testy exchange with the chair of the House Judiciary Committee today  during hearing in which lawmakers asked him for details on his handling of the criminal investigations surrounding President Donald Trump.

The chair of the committee, Democrat Representative Jerrold Nadler of New York asked Whitaker, who is an Ankeny, Iowa native, was asked if he had talked with President Trump about the investigation. “As I’ve said earlier today in my opening remarks — I do not intend today to talk about my private conversations with the president of the United States. But to answer your question, I have not talked to the president of the United States about the special counsel’s investigation, ” Whitaker replied.

Whitaker continued clashing with Nadler when he pointed out the chairman had exceeded his time limit for questions. “Have you ever been asked to approve any request or action to be taken by the special counsel?,” Nadler asked. “Mister chairman, I see that your five minutes is up,” Whitaker said to groans and laughter in the room. “I am here voluntarily, we have agreed to five minute rounds,” Whitaker said.

The hearing recessed a short time later as the representatives were called to take a vote. Whitaker is an attorney who had been serving as chief of staff to Attorney General Jeff Sessions when the president asked Sessions to resign. Whitaker was named acting Attorney General and is expected to be replace soon as William Barr will take over.

Whitaker was the Republican Party’s nominee for state treasurer in 2002. He was one of several candidates who competed against eventual Republican nominee Joni Ernst in the 2014 U.S. Senate Primary.