You are here: Home / News / $100 fine proposed for highway drivers loitering on the left 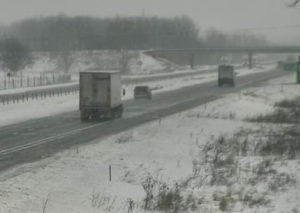 DOT camera of eastbound lanes of I-80 near Colfax.

Drivers in Iowa who linger too long in the left-hand lane of an interstate or four-lane highway could face a $100 fine under a proposal that has advanced to a House committee.

Representative Gary Worthan of Storm Lake is a truck driver and he often sees motorists driving way below the speed limit in the left-hand lane. “I have followed two cars driving side-by-side for miles that I wanted to pass with a truck…You get close to that road rage type situation where you just want to strangle somebody,” Worthan said this morning, with a laugh.

Many trucking companies now install a device on a semi to control the truck’s speed in an effort to save fuel costs and Worthan expects more trucking firms go that route.

“One guy’s truck will go 65 and the other one will go 66. It takes about four miles for a truck to pass and that backs up traffic,” Worthan said during a subcommittee meeting, “so the problem’s going to get worse instead of better.”

Susan Cameron Daeman, a lobbyist for the Iowa State Sheriffs and Deputies Association, said the group backs establishing a new fine for loitering in the left lane.

Representative Jon Thorup of Knoxville is a state trooper and he said a fine might help spread the message that the left lane is for brief use while passing.

“It is astounding how many people will not move over out of the lane even if I’m driving and I have my lights and siren on,” Thorup said. “It is amazing how many people do not look in their rear view mirror or maybe they have their radio on so loud they can’t even hear the siren.”

Legislators working on the bill may add language to make it clear driving in the left lane on an urban freeway during crowded, rush-hour traffic would be permissible for longer periods of time. The State of Illinois recently established a $120 fine for motorists who hang out in the left lane.