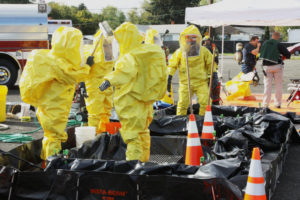 A report that ranks the states for their preparedness for public health emergencies places Iowa in the middle of the pack.

Iowa scored four out of ten for preparedness for diseases, disasters and bioterrorism. John Auerbach, president & CEO of Trust for America’s Health, says one category focuses on the immunization level for influenza, and Iowa ranked low.”That’s a marker for how quickly the health care system could administer a vaccine in a major outbreak of a deadly epidemic,” Auerbach says. “Less than half of the population that are recommended to get flu shots get them in Iowa.”

The report, called “Ready or Not: Protecting the Public’s Health,” also shows Iowa has room for improvement in terms of how well hospitals are prepared for halting the spread of harmful diseases or illnesses. “We looked at hospital quality safety measures particularly with regard to controlling hospital-based infection transference or contagion within a hospital,” Auerbach says. “We found a lower percentage of the hospitals that met the national standards for protecting patients.”

The report grouped the states into three performance categories, 17 states are in the upper tier, 20 in the middle tier and 13 in the lower. Iowa is in the middle tier, in part, due to issues with nitrates and other pollutants in our waterways. “The EPA monitors water quality and Iowa has had some problems at certain places within the state with regard to that,” Auerbach says. “That’s also an area where, as part of emergency preparedness, paying attention to the quality of water is important.”

The report shows deaths in Iowa due to drugs, alcohol or suicide are lower than the national average, but our adult obesity rate is higher than the norm.