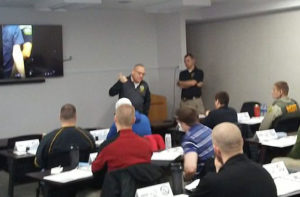 Officers in Sioux City are getting special training in handling impaired drivers.

They also add another element. “We introduce them to drug impaired driving, where they don’t get a lot of that at the academy,” Olmstead says. They have volunteers drinkers who help them run the training.

“We does them to certain amounts of alcohol and we have the students run them through the standardized field sobriety tests and they’re required to make decisions based on the standardized field sobriety tests and the other things they’ve learned in class today whether they would find them impaired or not. And then they estimate their blood alcohol content,” according to Olmstead.

He says the impaired driver training is important because those are seen now nearly as frequently as drunk drivers. “Whether it be the elicit drug methamphetamine, cocaine, marijuana, hallucinogens, marijuana, LSD, things like that,” Olmstead says. “But also people abuse their prescription medications a lot of time too and take for a valid medical reason and become impaired that way.” The training is taking place at the Woodbury County Sheriff’s Department Prairie Hills Center.