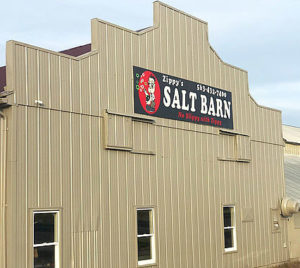 With another winter storm due to dump several inches of snow on Iowa this weekend, stores are running out of salt to spread on our driveways, sidewalks and porches.

A new eastern Iowa company that processes and packages salt is seeing more business than expected. Cody Coberly , co-owner of Zippy’s Salt Barn in Mechanicsville, says it’s a business avalanche. “It was great until the last couple three weeks when we got slammed with all the ice,” Coberly says. “We’ve been working around-the-clock. We’ve been putting in a second shift and working until midnight-one o’clock every night to get things done and also on the weekends.”

The company offers products like “Zippy’s No Slippy Ice Melt” as well as chemically-treated versions called “Fire Blend” and “RAZOR Melt.” With some Iowa stores selling out of salt, Coberly says he’s been getting calls from people seeking out the shakers and 50-pound bags.
“Right now, we’re going day-by-day,” Coberly says. “We’re not taking on anybody new. We’ll take walk-in customers, but we are able to keep up with demand right now.”

Officials with the Iowa DOT say the agency could end up using a record amount of salt and sand on our roads this winter. A typical season sees the use of between 130 and 140,000 tons of salt statewide. They estimate usage may hit 200,000 tons before spring.