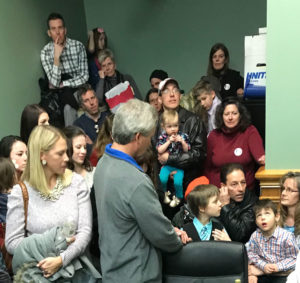 A hearing on an exemption for school vaccines was packed today.

A bill that would have given Iowa parents another way to opt out of vaccinations for their children has failed to advance in the Iowa Senate.

Iowans may now obtain a religious exemption to required immunizations before students may be admitted to public schools or licensed day cares. The bill that failed a Senate subcommittee would have created a philosophical objection to vaccines as well.

Dr. Nathan Boonstra, a pediatrician in Des Moines, said when it’s easier to get an exemption, more people get vaccine-preventable diseases. “We have large-ish outbreaks of measles in the northeast. We have measles in the Pacific Northwest. We don’t really want to put out a welcome sign for measles to the Midwest if we can help it,” he said. “There’s measles already smaller outbreaks in Illinois and other areas around the country, so anything that we can do to avoid that is very important.”

Dozens of parents and their children crowded into a committee room in the Iowa capitol to signal their support of a new exemption. Many, including Sonya Swan of West Des Moines, wore stickers for the group Iowans for Informed Consent.

“We, as a government, cannot take over the parenthood and the parentship and the responsibility and ownership of our children…when we have a sincere, philosophical concern,” she said, to applause. “These parents deserve a choice and the right to choose.” 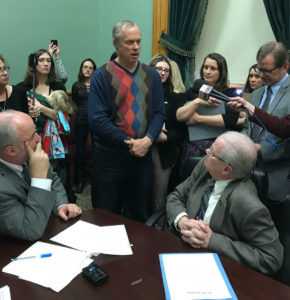 Megan Wisner, another member of Iowans for Informed Consent, said some of her relatives have had allergic reactions to vaccines.

“Vaccines as health care treatment should never be a one-size-fits-all because vaccines aren’t safe for everyone,” Wisner said. “…It’s been a fiasco trying to find a doctor that is willing to consider our unique needs as a family and respect my wishes as a parent.”

“Children belong to the parents, not the state. If you don’t believe that, go to North Korea,” Heikens said. “Many people here who are speaking on this issue are people who profit from sick kids. That’s how they make their money is off of sick kids.”

Dr. Kate Linkenmeyer of Des Moines responded to that criticism.

“As an Iowan wanting to help Iowans, this bill could have devastating repercussions,” Linkenmeyer said. “And it’s not coming from a place of not believing others or not hearing their stories or not being sympathetic to their stories, it’s knowing that we’ve all seen it and it’s heartbreaking watching someone die from these preventable diseases.” 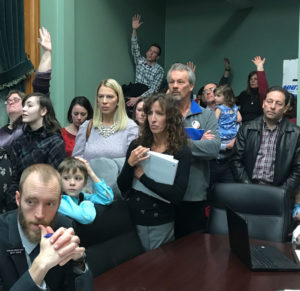 Senator Tom Greene, a pharmacist from Burlington, was one of two senators on a three-member committee who defeated the bill.

“One of the things I was taught from an early-age on in my pharmaceutical training was that vaccines overall are the most significant, positive public health issue that we have benefited from over the last 150 years,” Greene said, “and I do agree with that perspective.”

A second bill related to vaccines was killed by a senate subcommittee today. The defeated bill would have banned hospitals and other health care providers from firing staff or rejecting patients who haven’t been immunized against infectious diseases.