You are here: Home / Education / Iowa schools wouldn’t be required to have nurses, librarians 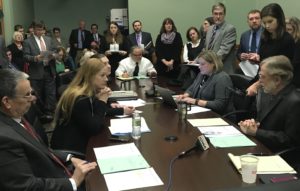 The Republican who leads the Senate Education Committee is championing a plan to get rid of the state mandate that Iowa schools have at least one school nurse and a teacher librarian on staff.

“This bill is about returning the authority to local school boards, local administrators and local teachers to make the decisions that make the most sense for their classrooms,” Senator Amy Sinclair of Allerton said to open a senate subcommittee hearing on her legislation.

Her proposal also would get rid of the mandate that schools collect data on whether students have had vision and dental screenings as well as a blood test to see if they suffer from lead poisoning. Melissa Peterson, a lobbyist for the Iowa State Education Association, suggested the bill sets up a system of haves and have-nots.

“We need to have consistent services provided to our kids,” Peterson said.

School administrators said school nurses help administer prescription medications for students and there might be legal liability for schools that get rid of their nurses. Sharon Guthrie, executive director of the Iowa School Nurse Organization, said a quarter of Iowa schools did not have a nurse on staff before the the state mandate took effect.

“Human nature tells you that if you say you don’t have to do something, you probably won’t do it,” Guthrie said.

Karla Krueger, a professor in the University of Northern Iowa’s College of Education, urged legislators to maintain the mandate for school librarians. She said teacher librarians have contact with every student in their school.

Emily Piper, a lobbyist for the Iowa Association of School Boards, said most of the ideas in the bill came from school boards seeking more local control.

“It’s not our intention…to put children at risk,” she said. “It is our intention to try to better focus our attention and energies.”

A Republican senator who joined Sinclair in supporting the bill says he’s interested in reducing administrative costs in schools and he sees this bill as one way to do that.