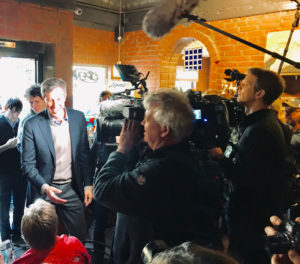 Joe Fierce of Keokuk wasn’t sure how to pronounce the candidate’s first name.

“All I really know about him is he was running against Ted Cruz and, for me, that’s a ‘gold seal’ right there,” Fierce told Radio Iowa.

“I might be kind of counter the trend on this because I know there’s a ‘Mr. Smith Goes to Washington’ vibe now, throw the bums out now. All of ’em,” Fierce said. “I think, however, that we need someone who knows how it works.”

Bonnie Peevler of Keokuk said O’Rourke is “of course” on her radar as she reviews her 2020 presidential choices.

“I think the character of the person matters more than the experience,” Peevler said, describing O’Rourke as “intelligent and thoughtful.”

Austin Bayliss, a Trump voter in 2016, drove nearly 100 miles from Wellman to Keokuk to see O’Rourke.

“It’s too early tell as far as who I’m going to caucus for,” Bayliss said, adding he intends to see every presidential candidate in person.

Heather Morgan of Keokuk said O’Rourke has everything she’s looking for in a candidate.

“He’s very conservative for a Democrat and I think if anybody can steal Republican votes, it’s probably going to be him,” Morgan told Radio Iowa.

O’Rourke shook her hand and many others in the Lost Canvass Coffee Shop in Keokuk before climbing on a chair and promising to campaign for the vote of “every single American.”

“I could care less your party persuasion, your religion, anything other than the fact that right now we are all Americans and we are all human beings and we would do anything in our power for one another, for this great country and for every generation that follows,” O’Rourke said near the end of his opening statement in Keokuk. “This is democracy.”